Bleaching of wood pulp is a multi-step chemical treatment to lighten its color, increase whiteness, improve cleanliness, and provide greater brightness stability. These steps are taken after a cooking process that removes most of the wood’s lignin. A sequence of bleaching stages is used for delignification and brightening with oxidants and other associated chemicals. Modern bleaching sequences use oxidants that that have replaced elemental chlorine (EC) with chlorine dioxide, hydrogen peroxide, pressurized oxygen, ozone, and peracetic acid. These products are used in more than 90% of global kraft pulp bleaching today, replacing the historically dominant use of chlorine gas and sodium/calcium hypochlorite.

PeroxyMAX is a new oxidant with the versatility to perform safely in several locations throughout the pulp bleaching process. 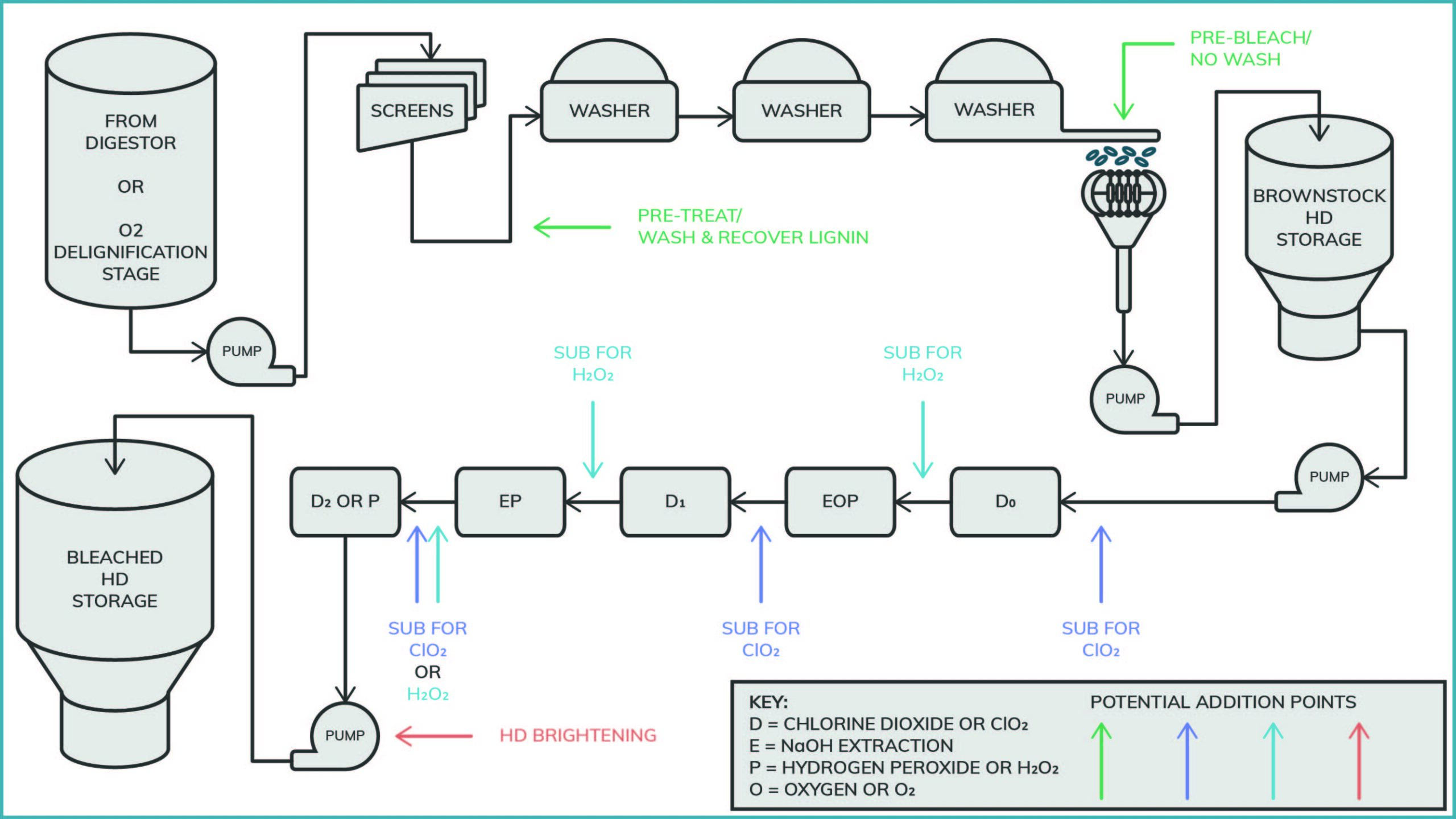 PeroxyMAXTM Addition Points in the Mill

Post-bleaching brightening of pulp in the bleached fiber high density (HD) storage chest is an effective approach to consistently meet or increase brightness targets, reduce color variation, and increase color stability and loss of revenue from fiber not meeting specification or limited production capacity. Practical and safe options for this application, however, must be considered with an eye on cost, performance, and impacts of carryover onto the paper machine. PeroxyMAX has a superior combination of attributes for this use.

At common HD chest conditions, PeroxyMAX has similar brightening capacity to PAA and ClO2 on a weight basis. Controlled laboratory tests on bleached kraft pulp show that about 1-2 lb/odt can result in a 1-2 point brightness gain for brightening with PeroxyMAX on pulp at its “natural” pH 5.5-6.5, 60° C, and 10% consistency.[1] 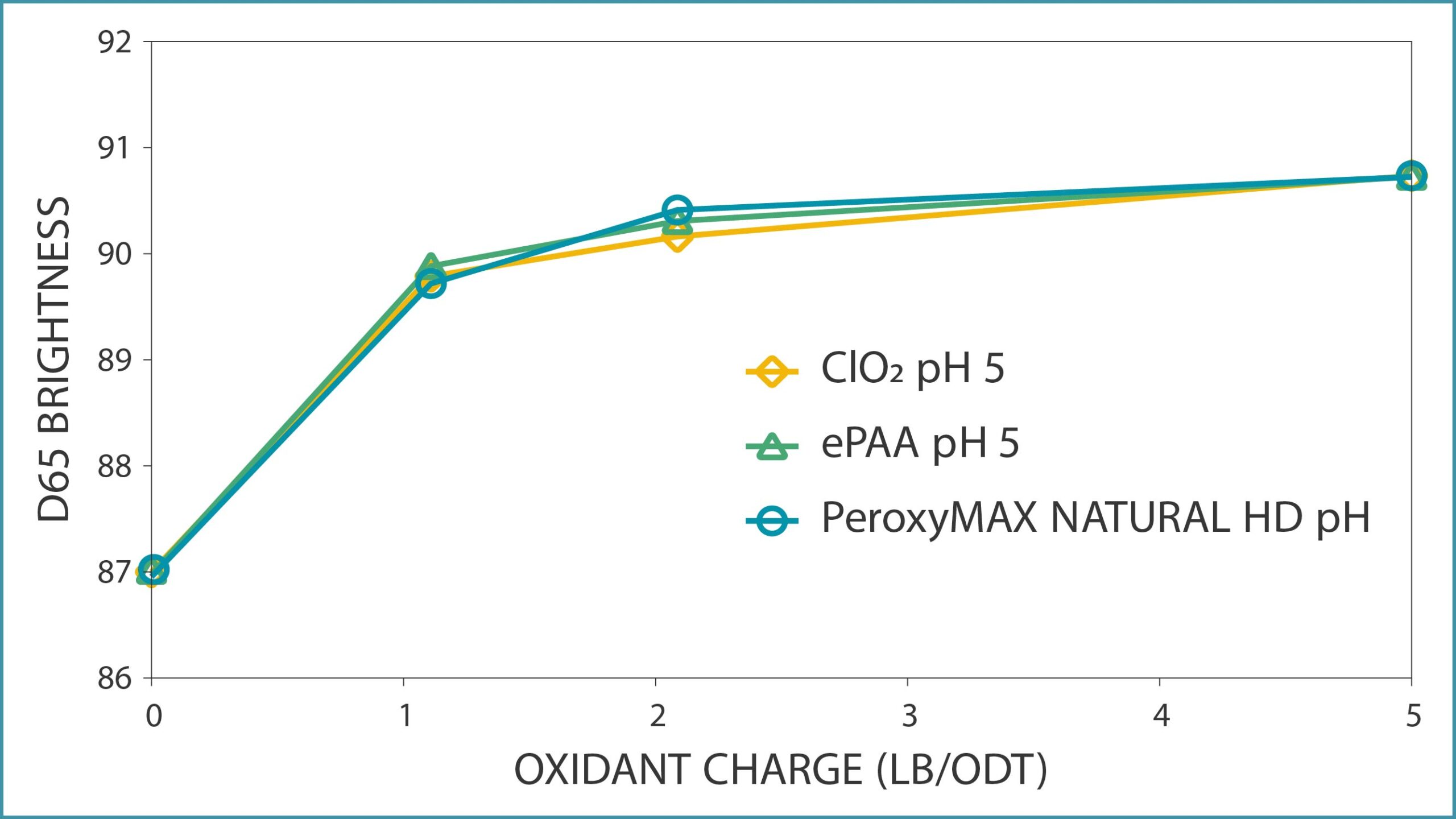 Comparing the color stability of post-bleach brightened pulp shows good performance of PeroxyMAX for inhibiting reversion under the accelerated aging conditions (TAPPI method T544 at 90°C, and 50% RH). Whiteness (L values) and yellowing (B values) are shown at 0 and 24 hour aging times. 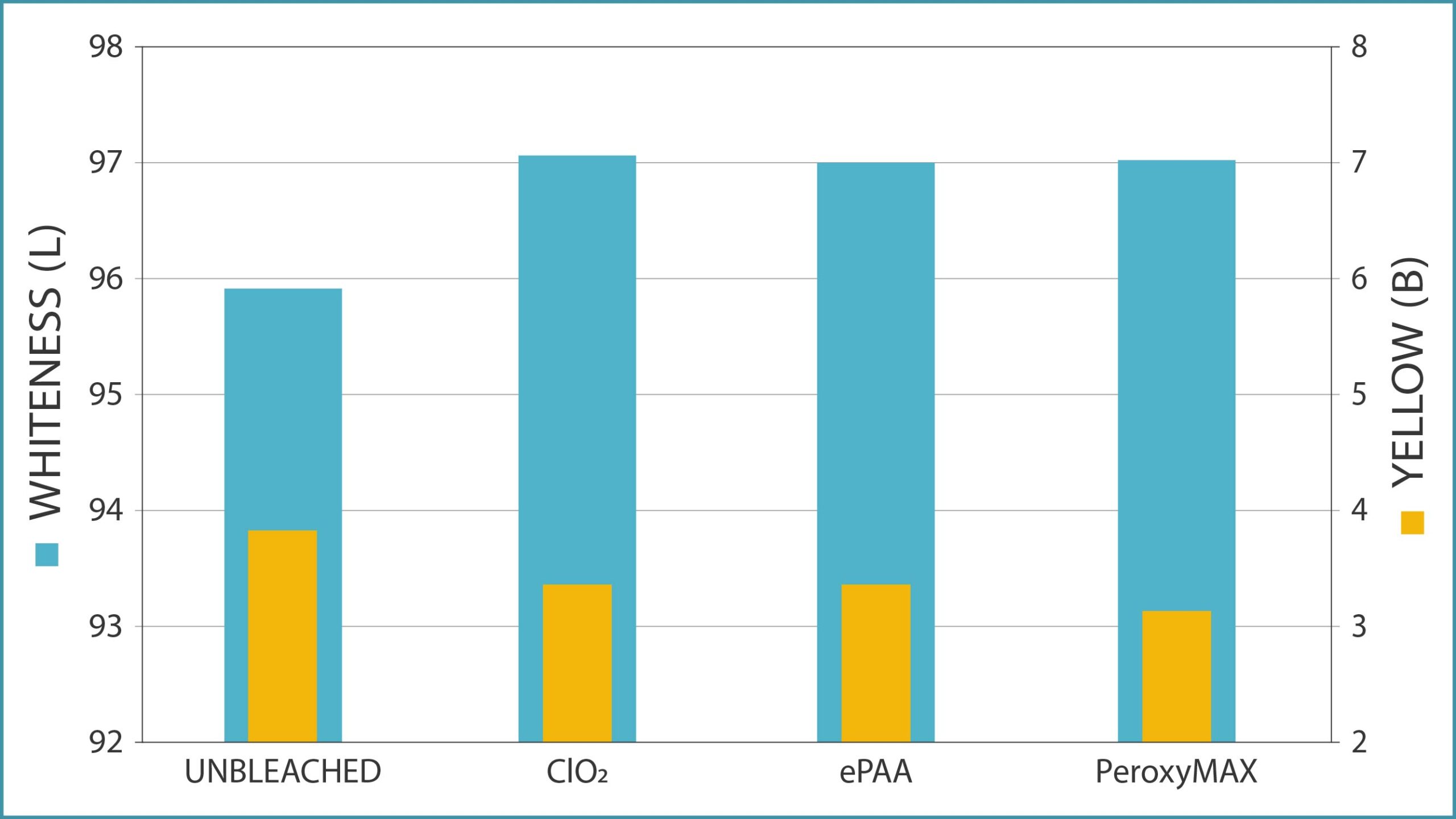 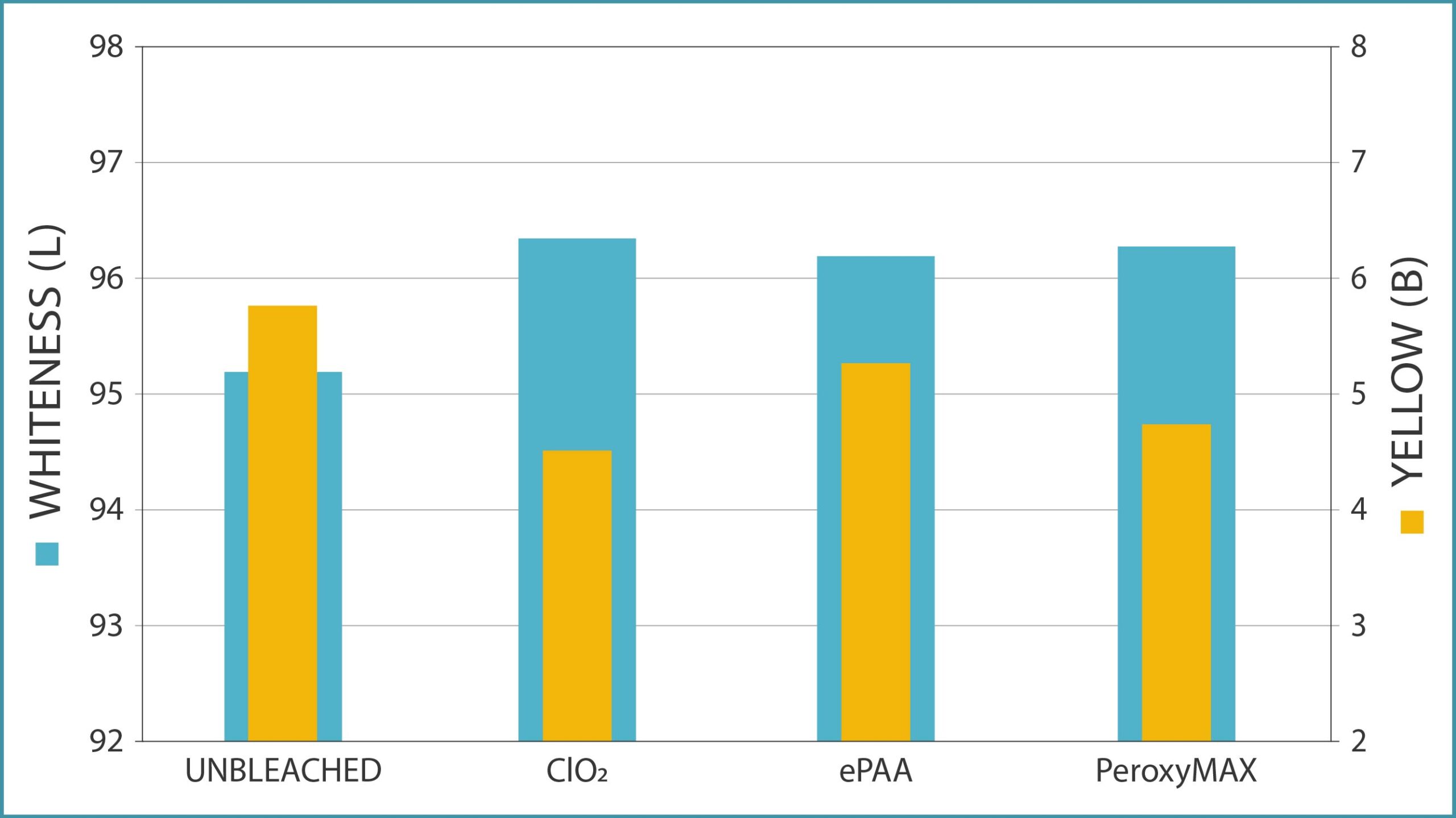 Post-bleaching with PeroxyMAX can be achieved in the high-density storage chest or storage towers without significant capital investment while lowering cost, increasing safety and minimizing carry-over compared to over-feeding chlorine dioxide (ClO2) to compensate for low brightness and reversion. The incremental costs of excess ClO2 can increase dramatically when brightness gains diminish while causing safety issues, corrosion, and detrimental impacts on paper machines and pulp driers. When mill capacity is ClO2-limited, post-bleaching with PeroxyMAX can help to increase throughput.

Several mills have adopted a final alkaline hydrogen peroxide stage to the bleach sequence to provide a final brightening stage to reduce ClO2 use. While effective, this approach drives additional costs for pH adjustment before and after the peroxide stage and use of an oxidant quenching agent to avoid damage to paper machine clothing and interference with biocide programs. PeroxyMAX can be used in place of hydrogen peroxide because it provides the same or better performance at the “natural” pH of pulp from the bleach plant without extra chemical costs. Consumption of PeroxyMAX during the time it spends in the HD chest leaves little to no residual, which prevents damage to press felts and is complementary to biocides on the paper machine.

Delignification is typically the primary function of the first oxidation and extraction stages in kraft pulp bleaching sequences. Together, these stages are often the majority use of oxidant and pH adjustment chemistry in the bleach plant. These stages also generate most of the COD/BOD and AOX in wastewater effluent. Reducing the amount of lignin and black liquor reaching the bleach plant can provide several cost-saving benefits including:

Meaningful kappa number reduction of kraft brownstock can be achieved in 5 minutes of oxidant contact time with PeroxyMAX, making it suitable for application in the washing stages or in the brownstock storage chest. In these examples, brownstock collected from washers was contacted for 5 minutes at 70° C and 5% consistency in controlled laboratory conditions. The results indicate the potential opportunity while specific fiber line conditions and cost tradeoffs will impact what level of treatment is beneficial at the mill.

Meaningful kappa number reduction of kraft brownstock can be achieved in 5 minutes of oxidant contact time with PeroxyMAX, making it suitable for application in the washing stages or in the brownstock storage chest. In these examples, brownstock collected from washers was contacted for 5 minutes at 70° C and 5% consistency in controlled laboratory conditions. The results indicate the potential opportunity while specific fiber line conditions and cost tradeoffs will impact what level of treatment is beneficial at the mill.

PeroxyMAX is highly reactive towards lignin and shows little activity toward cellulosic fiber up to high-charge use levels (1-20 lb/odt at 10-15% consistency) making it a good choice for retaining fiber quality. Its selectivity and shorter reaction times are advantages for maintaining fiber viscosity during delignification of brownstock (without the use of chelants) and in final brightening stages for bleached pulp compared to over-feeding ClO2 or alkaline hydrogen peroxide. 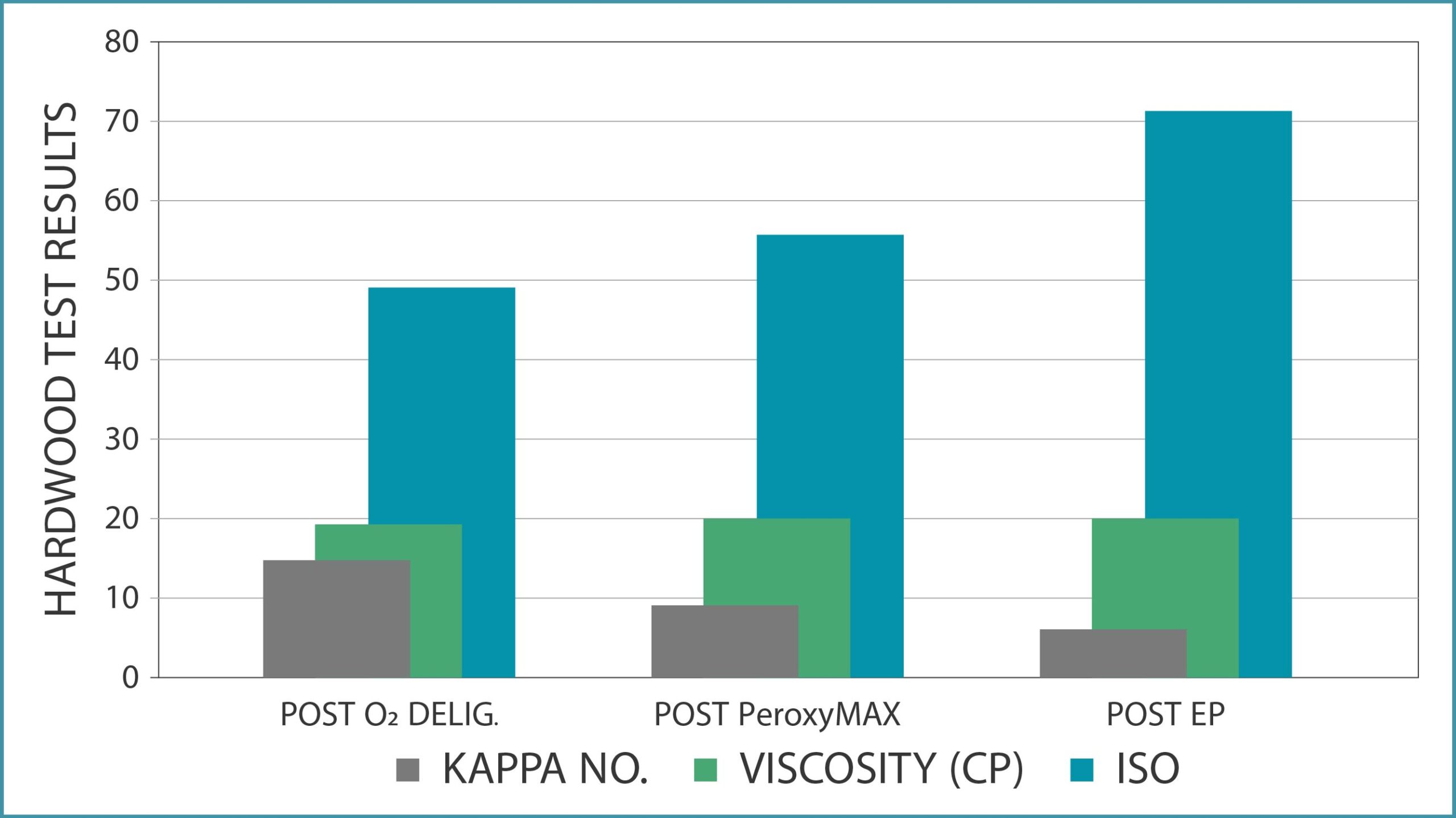 Reducing the amount of lignin reaching the bleach plant reduces COD/BOD and AOX formation in chlorine delignification stages. PeroxyMAX has a very low inherent AOX formation potential when added to brownstock. The comparison provided is normalized to the mass of AOX per pound of oxidant charge, indexed to the “control” with no oxidant added. 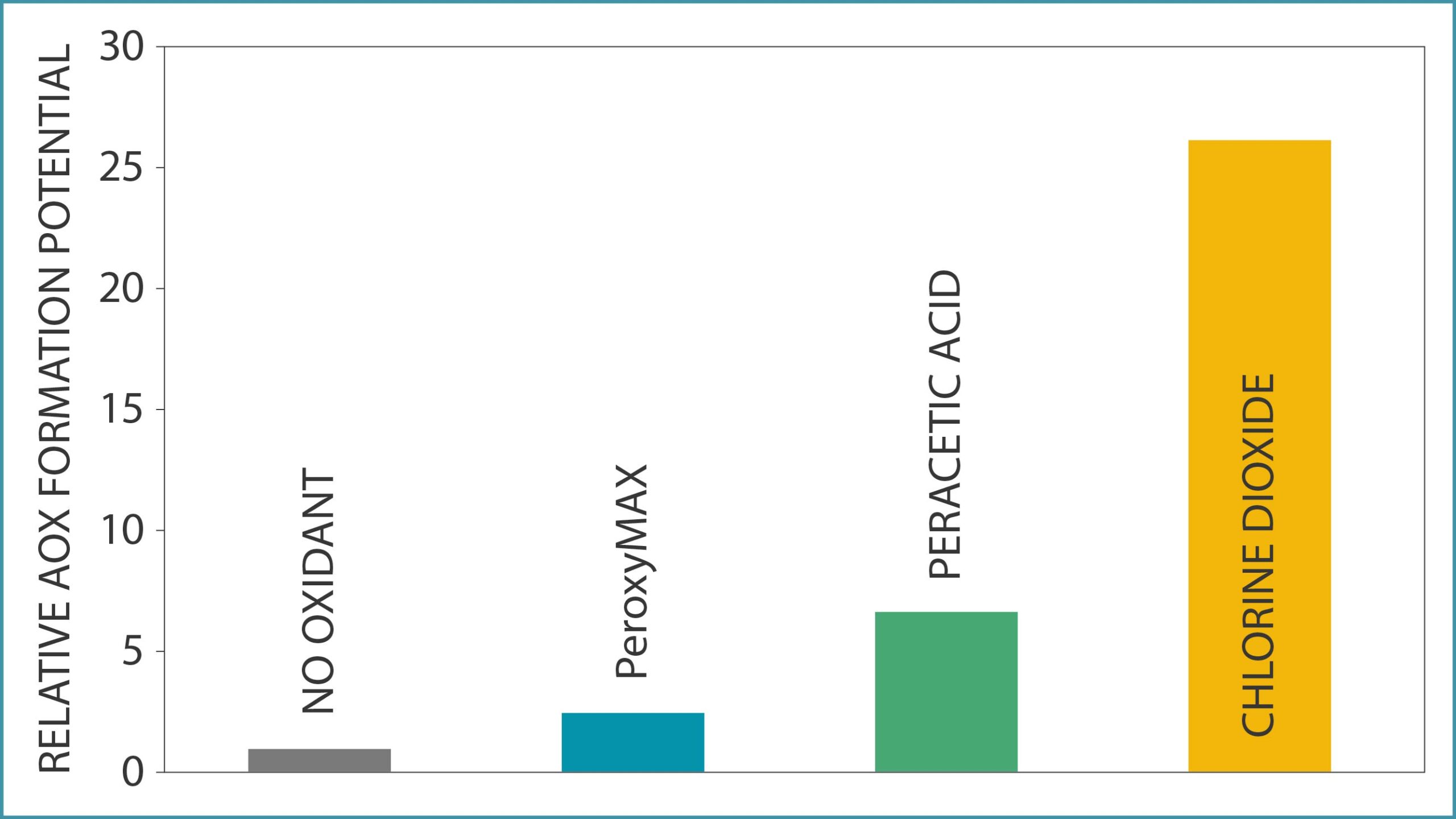 The rapid action of PeroxyMAX, combined with equipment compatibility and its superior safety profile, make it a primary option for delignification, fiber washing and odor control in existing infrastructure without significant capital investment.